Why We're Not Looking for Illegal Immigrants 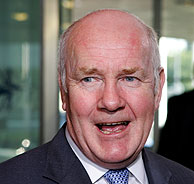 Well as I was sitting in the car last night I caught the news and the arrest of 5 illegal immigrants working in the Home Office. Laugh? I nearly stood for Parliament.

“Earlier this week a director at the IND caused a row after saying he did not have the "faintest idea" how many illegal immigrants were in the UK.”

In the words of time-honoured panto… THEY’RE BEHIND YOU!!!

“The Home Office said: "These individuals were the employees of a firm contracted to provide cleaning services. It is policy that all employees and contracted employees working in Immigration and Nationality Directorate (IND) buildings have security and employment checks carried out, which include checks on their immigration status. “

Well here we see the standard NuLab trick of blaming somebody else while claiming to take responsibility. I’m surprised they didn’t just say “They were employed by the Tories”. But the fact is they have said above that all contracted employees are checked, well they clearly weren’t. Another Home Office came to the defence:

“A Home Office spokesman said the Nigerian cleaners were arrested on their first day after standard checks.”

So here we have it… this was on Reid’s watch, he can’t blame this on Michael Howard, he can’t blame this on Charles Clarke. I hope that opposition MPs are going to keep at this point. Illegal immigration is a real problem in this country but this government has always avoided dealing with it by using the racism card or the Human Rights Act. Well now it’s coming back to bite them, and it’s probably not had a rabies jab.

Let me remind you of Dr. Reid's words that I blogged earlier when he took over the job:

"And they [the public] rightly believe that official systems in my new department, paid for by their taxes, shouldn't cock up systemically. "They believe the present situation isn't good enough and I agree with them.""

Care to eat these words John? I believe their less than 5% fat...

Posted by Ranting Guttersnipe at 9:03 am