And I Thought Charles Clarke was a Moron!!! 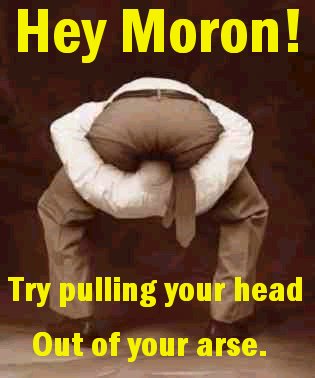 "It began as a routine photo opportunity, the stock-in-trade of Labour spin doctors.
The idea was to show the embattled Home Secretary getting to grips with the foreign prisoner deportation fiasco. Stung by criticism of his decision to take a holiday while his department is in crisis, John Reid arranged to be photographed attending a series of dawn raids yesterday as police and immigration officers searched for released foreign criminals. "

As soon as I saw the pictures of John Reid joining The Sweeney I thought it was a bad idea… there has never been any problem with arresting these people, the problem has always been what we did with them afterwards. He really should be spending the time in the office getting the deportation orders ready for these people. It’s not like he “helped the police with their enquiries”, they knew where these people were and went and arrested them. He just got in the way.

"But last night, the stunt appeared to have backfired spectacularly as legal experts warned that his actions could jeopardise the legal process of removing the arrested suspects from Britain.
As he will make the final decision on their fate - and is supposed to exercise his power 'independently' - lawyers for the foreigners could use the incident to argue that he was anything but independent. "

So let’s recap the last few weeks… we have a problem with foreign undesirables remaining in our green and pleasant land. In response the Home Secretary storms in and says “NO MORE COCK UPS!”, dons his flak jacket and promptly hands the defence the mother of all get out clauses.

Let me put this as politely as I can:

I’ll bet you a peerage he didn’t… any decent silk would have said “What are you thinking you moron?”

The Mail provides us with the comments of people who actually know about this sort of thing. The sort of people that Reid’s lining up and shooting like Red Army deserters.

"Keith Best, chief executive of the Immigration Advisory Service, said: "It could put him in an embarrassing situation if he was present at a particular arrest of someone over whom he then has to make a disinterested decision about whether they should be deported.” - Cock Up

"The Home Secretary should stand above operational matters, to be a disinterested party making decisions in a judicial manner." - Cock Up

Mr Best added: "It could put the Home Secretary in the same sort of personal difficulty that Jack Straw found when he said the Afghan hijackers in 2000 would be on the first plane out - until it was pointed out that he was responsible for hearing their asylum claims and he appeared to have prejudged them.

"It was tasteless to attend today and the Home Secretary needs more than gimmicks to sort out the Immigration and Nationality Directorate." - Cock Up

Immigration lawyer Pierre Makhlouf said: "The issue is whether the Home Secretary's presence did lend itself to some bias in the Home Office.
"If this were a case of mine, I would look to see if his presence, combined with a weak or rushed decision, had had an impact on the case." Cock Up!

Shadow Home Secretary David Davis said: "It would be a dreadful outcome if in pursuit of some media coverage he jeopardised the process for anybody who ought to be deported." - Cock Up!

Later, the Home Office played down the significance of the visit, insisting it would have no bearing on any decisions later by Mr Reid.

Of course it wouldn’t… can you picture the headlines if they are found not guilty of anything?